You’ll be hard pressed to find Aspiring Village resident, Richard Hutchison “Hutch” at home, especially during the winter months. If he’s not at Treble Cone perfecting his ski turns, he’ll be out in the hills e-biking or at the Lifestyle Centre with partner Diane enjoying a game of pool.

So how did a Pharmacist from Petone end up living life to the fullest in a lifestyle village in Wanaka?

“Purely by accident I visited snow for the first time in Tasmania and somehow those first two hours on snow changed the pattern of my life. The next day, I returned to the mountain, and to escape a blizzard, walked 18 kilometres out to the main road and hitched a ride home”

Fast forward a few years to 1982 when Richard pulled up in a bus outside the BP Service station in Wanaka, where captivated by the combination of mountains, lake and the outdoors lifestyle, Richard declared: “I will retire here!”.

Good things take time, so it took another 14 years before Richard retired from Pharmacy and bought a motel in Wanaka, and later built and opened the Aspiring Campervan Park. “It was revolutionary at the time, with under floor heating in the showers, spas and sauna, huge drying room for skiers.”

But after operating businesses open seven days a week for 55 years, it was time for a change.

“I was looking for an environment where I could truly relax, have all the facilities I would have in my own home and of course a wonderful sense of security a Lifestyle Village could provide.”

Aspiring Lifestyle Retirement Village offered all this and far more, so in 2017 Richard and partner Diane made the village their home.

“We have a swimming pool, a spa, a gymnasium, a library, and a sensational support team… and lots, lots more”.

“Diane and I love our village centre environment. We play pool most days, we enjoy the magnificent new lounge, and of course our social interaction with other village members.  We have met so many wonderful people, generous with their time, and delightful personalities.”

A central part of Richard’s life here in Wanaka is his love of skiing – although he’ll try to claim he isn’t any good at it. “If all the lessons I have had were laid end to end, they would cover a reasonable length of the universe.  I do still participate in Masters Ski Racing, albeit with a far less “gung ho” approach than a few years ago, finally realising that ability was actually more important than attitude.”

E-biking is another great passion of Richard and Diane. “It has enabled both of us to explore many paths and tracks that would previously be out of our ability on normal bikes.”

“We live in an environment with every facility anyone could desire, with amazing friends and neighbours, and the most friendly helpful staff, anyone could wish for.

“Diane and I consider ourselves to be among some of the most fortunate people on the planet.” 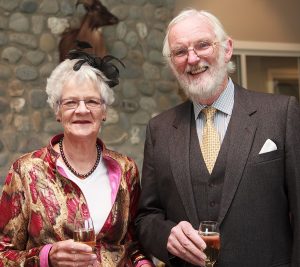 Ian and Judith Shawe have a knack of getting the most out of life – sometimes when they least expect it!  They met later in life at a church in Rangiora – people-loving Judith was the Chief Welcomer, and Ian arrived from Loburn to be welcomed.  Three weeks later they were engaged, married in 1999 and now living happily ever after at the Aspiring Village.   In Ian’s words – “When you see a good thing you don’t look back at our stage of life.”

After starting their married life in Rangiora and blending their two well-matched families (both had a daughter and son from previous marriages), they moved to Lake Hawea in 2003.  “I grew up in this area,” said Judith, “and we wanted to come back to support my mother in her later years.  We bought the section next door and established a B & B – something I had always wanted to do.”  The former Hotel Receptionist was great at welcoming the guests and making them feel at home, while Quantity Surveyor Ian was in charge of cooking the perfect breakfast and taking care of maintenance. .

They had watched the Aspiring Village develop from the very early days and always knew it would be the perfect place for them.  “We thought it would be a little later in our lives to be honest.  But then we had the idea of doing some extended travelling to celebrate our 70th birthdays – and thought we’d better buy a villa before we left rather than the other way around.  That way we knew we wouldn’t run out of money!”  So in June 2014 they moved into their very sunny two bedroom villa – and 12 months later left on their travels.  “We didn’t worry about our home at all – which was a wonderful feeling of freedom and something to look forward to when we returned.”

Their motivations for moving into the village were slightly different – for Judith it was the chance to be part of a community.  “I love the diversity of people that live here – from all walks of life – including my sister who lives just down the road!  Our morning teas are a great way to connect with people – and for others Happy Hour does the same thing.”  For Ian, it was the freedom from maintenance – “they do everything for you here” – which has given him time to improve his fitness, working out in the gym three days a week, and swimming three days a week as well.  “I still have time to do a little work for a QS firm in Christchurch – which helps top up the travel fund.”  Ian has set up a very tidy and organised office in his garage which makes that very easy.

Their advice for people considering making the move to the Aspiring Village.  “Don’t leave it too late – downsizing can be quite stressful, if you do it early enough you have the time and energy to bounce back quickly and really enjoy the lifestyle here.”  – “We feel very privileged to live here.” 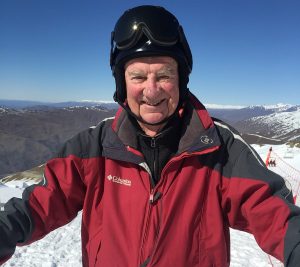 Look around the Aspiring Village on any given day, and you’ll see plenty of residents out walking, biking, pottering in their gardens and heading to the Lifestyle Centre for a swim, or to enjoy the company of others.  Look further afield up the nearby ski slopes and you might see a few more residents enjoying the snow – either skiing or sightseeing.  The one place you wouldn’t expect to see an Aspiring Village resident is lined up at the start of a ski race – but that’s exactly where you would have found John Perkins this winter.  In fact, he won the 80-85 year Masters race at Treble Cone, though he is quick to point out there were no other entrants!

John and his wife Margaret moved to the Aspiring Village in 2013.  “We had lived in Queenstown for a number of years, raising our family and enjoying all that it had to offer.  We had a three-storey home and Margaret struggled with respiratory problems in her later years, so we realised we had to move somewhere on one level.  Our daughter, son-in-law and 3 grandchildren live in Wanaka – and we had been spending an increasing amount of time babysitting and spending time with them.  On one of those visits we popped in to have a look at the Aspiring Village – and fell in love with the idea. Margaret was very fond of saying we made ‘the smartest move in the world when we moved here’ and it’s hard to disagree with that.”  Sadly Margaret’s respiratory problems didn’t improve, and John and their family lost her in early 2015.  Having family close by really helped John over this time as did those who lived around him, “Everyone in the village was so lovely – the staff are wonderful, I can’t speak highly enough of them.”

John and Margaret’s love of the outdoor lifestyle is something they both explored over the years.  While he and Margaret met in Liverpool (he is English and she was on her OE from Australia), they moved around the world for much of their lives – spending time in Australia,  and 14 years in Papua New Guinea where John’s pilot skills led them into a business.  Before they met, Margaret had worked in NZ for a year, and had always wanted to return.  So in 1976 they headed here on holiday where they fell in love with the Lakes District and decided it would be a great place to raise their 3 children.  “Skiing and sailing were our major passions, that we explored with our family whenever time allowed.”  And that active lifestyle shows no sign of waning.  As well as spending 40 days on the slopes this year, many of them with his grandchildren “who are the ones taking me off to different parts of the mountain these days”, John also bikes and walks in the summer months.  He is full of praise for the Wanaka lifestyle – “It’s a little quieter than Queenstown, but a lot less hassle getting around – and the parking is much easier!”